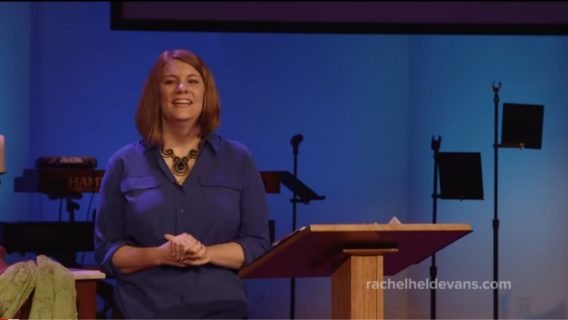 Her death came at the end of a short illness that her husband Dan Evans describes as a surreal experience.

“This entire experience is surreal,” he wrote on her blog. “I keep hoping it’s a nightmare from which I’ll awake. I feel like I’m telling someone else’s story. I cannot express how much the support means to me and our kids…We are privileged. Rachel’s presence in this world was a gift to us all and her work will long survive her.”

Rachel’s health battle started around April 14th. She tweeted that she was in the hospital due to a flu and UTI combo, and that she was experiencing a severe allergic reaction to the antibiotics that gave her. She requested prayer.

Within days of that tweet, her condition took a turn for the worst as she began to have unexpected symptoms.

“During treatment for an infection Rachel began exhibiting unexpected symptoms. Doctors found that her brain was experiencing constant seizures,” Dan wrote on April 19th. “She is currently in the ICU. She is in a medically induced coma while the doctors work to determine the cause and solution.”

Sadly, Rachel never regained alertness after being placed in a medically induced coma.  Doctors tried to treat her constant seizures, which included her being transferred to three medical facilities during her ordeal.

On April 30th doctors attempted to wean her off the coma medication. There was a reduction in the number of seizures she experienced, however, on May 2 her health again took a turn for the worse, and she could not recover.

“Early Thursday morning, May 2, Rachel experienced sudden and extreme changes in her vitals. The team at the hospital discovered extensive swelling of her brain and took emergency action to stabilize her,” Dan wrote in an update. “The team worked until Friday afternoon to the best of their ability to save her. This swelling event caused severe damage and ultimately was not survivable.”

Rachel leaves behind not only her spouse Dan, but their two small children.

The New York Times bestselling writer of the book A Year of Biblical Woman­hood  connected with readers six years ago when she wrote about the comedic experiences that she encountered by living like a woman who was alive during Biblical times.

Her work reverberated throughout the culture, and her loss has been felt by other Christian leaders like Beth Moore, who tweeted her sadness over the news.

Rachel’s friends started a GoFundMe page weeks ago to help cover the mounting medical costs. They were able to raise over $70,000 in the first day. The total is now at nearly $180,000. If you would like to donate to the Evans family, please visit the GoFundMe page.