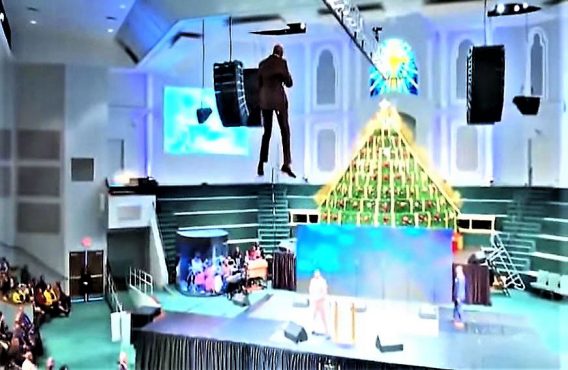 Pastor Bartholomew Orr has received a lot of criticism over the past few weeks from countless people who witnessed the viral video of him zip lining through his church while preaching recently. But the preacher is revealing why he is perfectly fine with all of the backlash.

The pastor of Brown Missionary Baptist Church in Southaven, Miss expressed gratitude for the moment and looked to Philippians 1:12-18 to explain why he was perfectly fine with all of the criticism he was receiving from people online who questioned if he was misusing church funds just to fly through the air for a few moments.

“Paul said what has happened to me, some of it has been out of envy or whatever,” Orr told Baptist Press News. “He says but, if the Gospel is going forth … that’s perfectly fine. I’m glad that the message is going forth. So I looked at it as a win-win situation.”

A clip of the zip line sermon video posted on Facebook has been viewed over 200 million times. Despite the fact that some of those views came with a great deal of criticism, Orr believes it was a great opportunity for him to spread the gospel.

“God took the negativity and turned it into an opportunity,” he said. “Because the unique thing was, that little clip alone, just a minute, the message was real clear: ‘He’s coming. He’s on His way back. Jesus Christ is returning. Here’s the question, ‘Are you ready for His return?'”

The zip line used by Orr was in the church for the annual Christmas production and has been used for that purpose for the past four years to fly characters like angels and Jesus into the play. The self-proclaimed prop preacher explained why he felt it was a good idea to utilize the zip line obtained by sponsors.

“Jesus was an object preacher,” Orr said. “If the message is going forth and you’re trying to be sound to the biblical text, I believe you ought to use everything at your disposal.”