The Faith of Rosa Parks: 4 Ways Her Faith Shaped Her Legacy 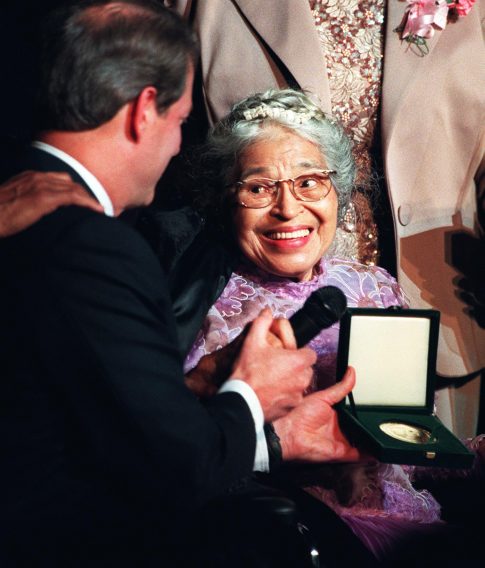 On December 1, 1955, Rosa Parks refused to give up her seat on a segregated Montgomery bus and changed the course of history.

“In the end, God used a simple bus ride to accomplish more than we could have ever dreamed,” she later stated.

Today marks the 107th birthday of  “The Mother of the Civil Rights Movement.” In celebration of her and black history month, Ambo TV looks at four ways this civil rights heroine’s strong Christian faith shaped her legacy.

1. Parks Attributes Her Faith For Giving Her Courage to Refuse to Give Up Her Seat

Parks’ biographer Jeanne Theoharis, described her as a “staunch and active Christian.” She was devoted to her faith, carrying her Bible with her. It was her faith in God that gave her the courage to stand up to segregation on that fateful day in December 1955.  “I instantly felt God give me the strength to endure whatever would happen next,” she recounted. “God’s peace flooded my soul, and my fear melted away.  All people were equal in the eyes of God, and I was going to live like a free person.”

Born Rosa Louise McCauley, her grandparents instilled Christian values in her from a young age.  In her autobiography Quiet Strength, she noted, “Every day before supper and before we went to services on Sundays my grandmother would read the Bible to me, and my grandfather would pray. We even had devotions before going to pick cotton in the fields,” she wrote. “Prayer and the Bible became a part of my everyday thoughts and beliefs.” The faith her grandparents taught her as a little girl gave her the strength that undergirded her activism as an adult.

3. She Was a Member of the African Methodist Episcopal Church

Rosa Parks was a lifelong, active member of the historic AME church, the first Black denomination founded in America by the former slave Richard Allen.  She served as a stewardess, helping with Communion and baptisms in her local AME congregation in Detroit. While she was not a member of the clergy, she was a deaconess, the highest position for a laywoman in the denomination.  It was her time in the AME church where she learned that faith required action, especially in dealing with injustice. “I learned people should stand up for their rights, just as the Children of Israel stood up to the Pharaoh,” she once commented.

4 . Her Faith Fueled Her Lifelong Activism

While a common perception of Parks is that she was an older woman who decided that she would not give up her seat one day because she was tired, this is far from accurate. She was an activist before her arrest, serving as secretary of her local NAACP, investigating acts of violence against Blacks and attending civil rights training. “People always say that I didn’t give up my seat because I was tired, but that isn’t true,” Parks clarified. “I was not tired physically, or no more tired than I usually was at the end of a working day. I was not old, although some people have an image of me as being old then. I was forty-two. No, the only tired I was, was tired of giving in.” In the end, she never faltered in her fight for justice, believing God was with her.  She once declared, “God has always given me the strength to say what is right.”

This article was first published on this site February 4, 2019