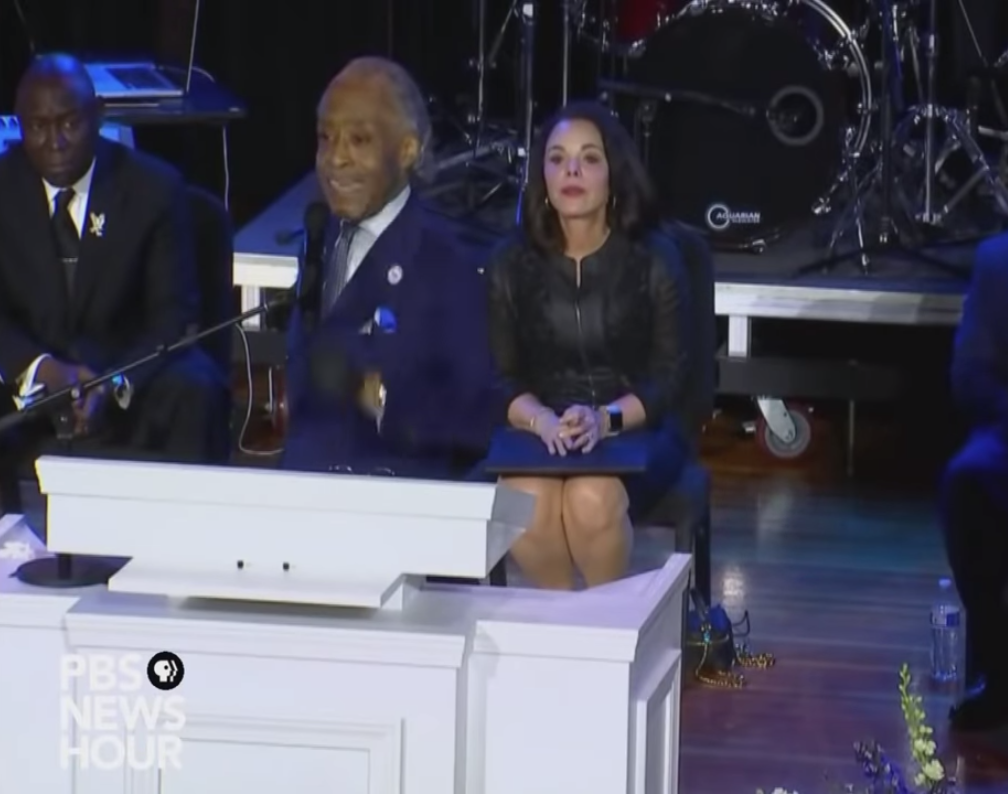 Despite the continued threat of COVID-19, people from across the country came together to honor Floyd. Celebrities such as T.I. and Tiny, Tyrese, Master P, Kevin Hart, Ludacris, Tiffany Haddish, and Marasai Martin were present. Sen. Amy Klobuchar, Representatives Ilhan Omar, Sheila Jackson-Lee, and Ayana Pressley were among the politicians there in support as well.

The Rev. Al Sharpton gave an impassioned eulogy rooted in the biblical passage Ecclesiastes 3:1, “there is a time for everything, and a season for every activity under the heavens.’’ He stated that America is in a different season and called for justice and police reform.

The National Action Network leader saw Chauvin’s knee on Floyd’s neck as a metaphor for America’s relationship with African Americans.

“Get your knee off our necks,” he declared. “We don’t want no favors. Just get your need off our neck and we can do and be whatever we want to be!”

Sharpton decried those who want silence over peace and said that we must turn on the lights to expose the roaches infecting our society, heavily insinuating the president and others.

During a particularly poignant moment of the eulogy, the seasoned preacher opined that Floyd may have made his way to heaven with the help of his mother. In the brutal video, Floyd can be heard calling out to her.

“Maybe he was calling his mother because at the point that he was dying, his mother was holding her hands out saying ‘Come on George, I will lead you to where the wicked cease from troubling and the weary are at rest,” he said. “Maybe his mother called on George and said, ‘There’s a God that still sits high, but looks low and He’ll make a way out of no way.’”

While Shparton offered critiques, he remained hopeful about the future given the season America finds itself in. He shared how he was encouraged to see other races standing up for the rights of African Americans.

“I looked this time and saw marches where in some cases, young whites outnumbered the blacks marching,’’ he stated. “I looked and saw people in Germany marching for George Floyd.”

Sharpton ended with a rousing farewell to George. “Go on home George! Take your rest, George. You changed the world, Geroge!”

Following the eulogy everyone present stood in silence for eight minutes and forty-six seconds, the amount of time Floyd was on the ground.

The memorial service included other heartfelt speeches from family members and close associates of Floyd. Attorney Benjamin Crump, who represents the Floyd family, stood before the congregation to remind everyone that justice needed to be served.

Floyd’s brother, Rodney Floyd, remembered that George was willing to stand for justice saying, “Floyd would stand up for his family and friends and he’s great at that, and I want you guys to know that he would stand up for any injustice everywhere.”

Brandon Williams, Floyd’s nephew, spoke with thankfulness about George, who he considered to be his role model.

“I want to say thank you to him for being there and being a real genuine person, and being loving and caring,” an emotional Williams said.

Recording artist Hezekiah Walker performed his hit song “Every Praise” at the request of the family. The trip to Minnesota was Walker’s first trip since the COVID-19 pandemic, but he felt it was honored to be called upon for this moment.

“This is my first time flying since COVID. I’m on my way to Minnesota to sing for George Floyd memorial pray for me! I’m honored, the family requested “Every Praise” and that’s what we will do today PRAISE,” Walker posted on Instagram under a picture of him on a plane.

Jamal Bryant, pastor of New Birth Missionary Baptist Church concluded the service with a benediction highlighting the similarities between Floyd’s death and the death of Jesus Christ.

“In the name of an innocent black man by the name of Jesus” he added, “who was killed by a government and still rose again, and with that power, we march on until victory is won.”