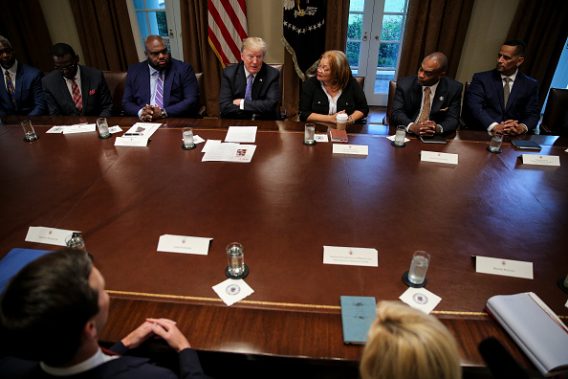 The Rev. Van Moody, founder and senior pastor of the Worship Center Christian Church in Birmingham, Ala faced some criticism for meeting with the president about prison reform initiatives earlier this year, but now he believes a Christmas miracle may have come from the ordeal.

Over the summer, a number of pastors congregated at The White House to discuss prison sentencing reform. The majority of pastors in attendance were black and received backlash for meeting with the president who a number of people have accused of being racist.

Moody pointed out that going to the White House in an attempt to help push the prison reform initiative forward has resulted in what he called “vicious attacks” from people that he admired. Still, he says the passage of the new law gives him reason to hope for improved bipartisan relations.

“While I don’t expect to hear anything positive from them now that this bill has been signed into law, I am still hopeful. The bipartisan support and this bill becoming law show us what can happen if we stop attacking each other and work together for the common good,” he said in a recent Al.com report. “This shows us that reconciliation is the way forward and that the message of Christmas is what we should grab hold to and live every day. After all, this is what the Angels meant when they said in Luke 2:14 (KJV) “Glory to God in the highest, and on earth peace, good will toward men.”’

Now that the First Step Act prison reform law has been approved by the president, Moody spoke about the possibilities for reconciliation.

“Since we are living in a tense political climate, the fact that the First Step Act Prison Reform bill has received bi-partisan support speaks about the possibility for reconciliation, the preacher wrote in a message. Unfortunately, much of our world history is a story of conflict, and many days it feels like that trend is continuing,” he wrote. “This is why when reconciliation takes place it demands that we stop and pay attention to it. Reconciliation is the restoration of peace, and it’s the miraculous cure for all of the brokenness and strife we are experiencing in the world today.”

Moody pointed out that CNN political commentator Van Jones called the fact that the prison reform bill was being signed into law a Christmas miracle.

“I agree with him,” Moody said.

The preacher explained how people on both sides of the proverbial political fence can view the reconciliation that he says is happening through the new law.

“Leaders who are normally on the opposing sides of issues came together and overwhelmingly supported this legislation that will help people in significant ways. Reconciliation is not the same as resolution,” he said. “Reconciliation buries the hatchet but not the issues. When reconciliation happens, you continue to work on the issues, but you do it with respect and love instead of sarcasm and anger.”