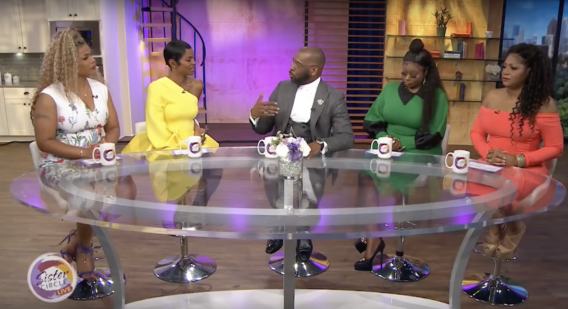 The film, which follows a storyline similar to the Prophet Hosea, stars Kenneth Wayne as a preacher who is condemned by the church for marrying a woman who is a prostitute.

Speaking to the hypocrisy sometimes found in the church, the movie addresses how the church can alienate people by making them feel like they do not belong.

“Everyone who is in the Church acts as if they don’t have a testimony,” Bryant stated. “And so you have a whole generation who feels like they’re not welcomed in if you’ve got a tattoo, if you’ve got piercing, if you’re not wearing Chanel and St. John. This is really to force; what is the real purpose of the Church.”

Bryant expressed his belief that the church must be less critical of people in order to be more effective in bringing them closer to God.

“If we’re not doing outreach then its a country club,” he told the hosts. “we really got to do something with intentionally to get another generation involved.”

Sinners Wanted has an all-star cast including seasoned actors like Lemar Roockered and Clifton Powell. Bryant said these actors were purposely picked because of they relatability.

“They bring credibility. We didn’t want deacons in it or be from the praise team. But these are people who we can identify and say okay, I know ‘em — this gives us a passport from the street corner to the choir loft. And I think giving that level of identifiability really links to our credibility.”

Sinners Wanted opens in select theaters on May 31. For information visit the film’s website.