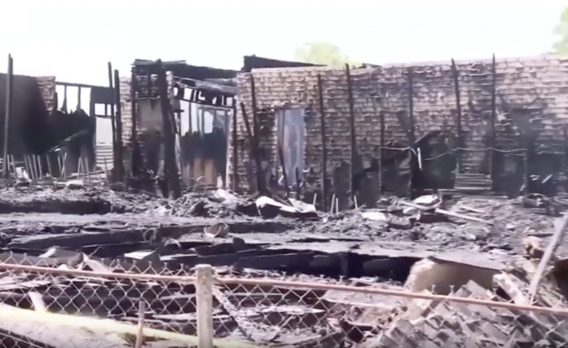 Police arrested Holden Matthews, the 21-year old son of a deputy sheriff, for allegedly burning three predominately black churches in St. Landry Parish, La. over the course of ten days. He was reportedly turned in by his father.

The first fire occurred nearly two weeks ago on March 26, and completely destroyed St. Mary Baptist Church in Port Barre. On April 2 Greater Union Baptist Church, a 129-year-old congregation, was set ablaze by a fire with similar characteristics as the St. Mary Baptist fire.  Four days later on April 6,  Mount Pleasant Baptist in Opelousas was also decimated by a fire.

Initially, authorities were reluctant to connect the three fires, but expressed concerns that the potential arsons were related.

“There is clearly something happening in this community,” State Fire Marshal H. Browning acknowledged in a statement.  “There certainly is a commonality, and whether that leads to a person or persons or groups, we just don’t know.”

Now that Matthews has been arrested, uncovering his motives remains a task for investigators. Authorities suggested at a news conference that Matthews’ connection to the musical genre black metal may have influenced his behavior. According to the authorities, Black metal has a related history to church burnings.

However, for others in the community, given the racial makeup of the congregations, they wonder if the fires are more likely connected to America’s unsavory history of attacking black churches as of a form terrorizing black communities. Since the time of Jim Crow until the present, black churches, particularly in the South, have found themselves on the receiving end of racist attacks.

In 1963, for instance, four young girls were killed when members of the Ku Klux Klan placed a bomb in the 16th Street Baptist Church in Birmingham, Ala.  Only one person was prosecuted for the crime years later, but others are believed to have been involved.  The girls’ deaths became a galvanizing moment for the civil rights movement.

More recently, in 2015 Dylann Roof shot and killed nine members of the historically black church Mother Emmanuel in Charleston, S.C, including the church’s pastor Rev. Clementa Pinckney, during bible study.  Roof has been sentenced to death for the murders.

While Matthews’ motives remain a mystery, for Rev. Gerald Toussaint, the pastor at Mount Pleasant Baptist Church, does not want to speculate. Rather, these events have evoked other questions for him.

I’m trying to find out who did it, why they did it, did it have anything to do with me,” Rev. Toussaint told the New York Times days before Matthews was arrested. “I don’t know none of this.”

As this community, and the rest of the country, wait for more answers, these congregations are not letting the fires stop them from holding service. On Sunday, Greater Union Baptist Church, which is led by Rev. Harry J. Richard, held service at a local Masonic Lodge.

Rev. Richard used that time to offer a moving prayer for the then-unknown perpetrator.

Ultimately, for Rev. Richard, what was lost was a building, but the spirit of the church remains.

“They burned down a building,”  Rev. Richard said.  “They didn’t burn down our spirit.”