Katy Perry Explains An Emotional Return To Church With Her Mom 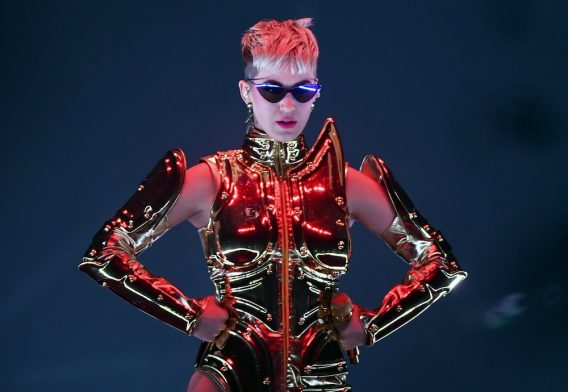 Katy Perry no longer subscribes to the same Christian faith that her preacher parents instilled in her, but the pop star recently returned to church.

The 33-year-old pop star is the covergirl for the August 2018 issue of Vogue Australia where she opened up about visiting a church with her preacher mother Mary Hudson. The experience brought Perry to tears after years of straying away from organized religion.

“It started when we were on the Asia leg of the tour and I went to mass with my mom,” the singer told Vogue. “She hadn’t sung those songs in 40 years and watching her made me cry. It’s so beautiful and humbling to re-centre in a place where it’s not about anything else but reconnecting with the divine.”

Perry experienced another spiritual moment with her mother in April when the pair went to Rome with the singer’s actor boyfriend Orlando Bloom. The pop star was invited to speak at a health conference about transcendental meditation which was co-created by the  Pontifical Council for Culture.

The event presented an opportunity for Perry, her mother and boyfriend to meet the Pope who she spoke highly of.

Honored to be in the presence of His Holiness @franciscus' compassionate heart and inclusivity. Thank you to @meditationbob and #TheCuraFoundation for making it all possible.❤️🕊#UniteToCure

“I’m such a big fan of Pope Francis. It’s a combination of compassion, humility, sternness and refusal. He is rebel – a rebel for Jesus,” she said. “…He is bringing the Church back to humility and connecting with people. He’s very humble and not frivolous.”

While Perry’s mother has been praying for her to return to God, the singer explained her stance on the matter. The singer said she still has a relationship with God.

“My mom has prayed for me my entire life, hoping I’d come back to God,” she told Vogue. “I never left Him, I was just a little bit secular, I was more materialistic and more career-driven. But now that I’m in my 30s, it’s more about spirituality and heart wholeness.”

Katy’s father Keith Hudson is also a preacher and previously told people to pray for their daughter instead of judging her.

“I want you to pray for my daughter,” Keith previously said when speaking at the Church of Grace in Yorba Linda, California according to Radar Online reports. “Don’t judge her, pray for her.”