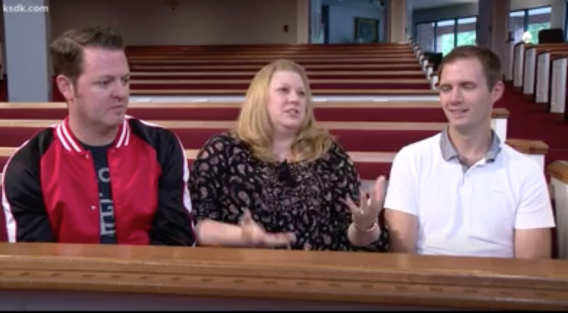 Of the many hats pastors are often called to wear, firefighter is typically not included.  But last Thursday that is the role three pastors assumed.

Matt Vollmar, along with his wife Lindsay and his associate pastor Andy Black, all serve on the ministerial staff at St. Matthew United Methodist Church in Belleville, Ills. Matt is the worship leader and Lindsey is a children’s minister.

Normally, the three pastors would have been in the church preparing for the upcoming Sunday services. But last week they decided to take a lunch break at a friend’s home.

On their drive back, the pastors soon found themselves taking action to avoid what Signal Hill fire officials said might have been a “tragic outcome.”

While driving in their neighborhood, Lindsey told 5 On Your Side that they noticed something unusual with their neighbor’s house. “I just saw smoke coming out of the top of what looked like the house.”

Much like the story of the Good Samaritan, the pastors decided to not overlook the troubling situation, but instead stopped to make sure no one needed help.  When they did, they heard a cry for help. “We could hear somebody say something and that’s when we knew we had to take action,” Lindsay stated.

Apparently the woman, whose identity has not been released, left something on the stove and became distracted with a phone call.  When she tried to open a window to let some of the smoke out, the situation became worse.  The smoke quickly incapacitated her.

While Lindsey called for help, Andy and Matt entered the home and crawled on the floor looking for the source of the cry.

“We both got on the ground and we just started crawling around and went to the bedroom area and just started checking door knobs,” Andy said. They found the victim who “kept saying help me, help me,” Matt recalled.

Together Andy and Matt got on each side of her and escorted her out of the house.  The victim of the fire is expected to be fine.

In reflecting on why he believes this potential tragedy turned out much better, Andy gave a response fitting for a pastor, “I think God had His hand on this situation, for sure.”