Where Are Your Weapons | Ambo TV
Featured Posts

Where Are Your Weapons 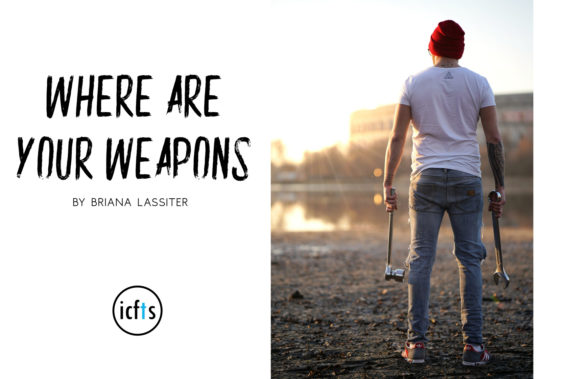 Before every successful battle in the Old Testament, the people of God always began by enquiring of the Lord. “Lord, what do YOU say about this battle? What should I expect, and how should I proceed?”

When given, and acting upon the Lord’s direction, they were always victorious.

By man’s standards, many of the Old Testament battles seem to be fodder for unbelief and proof that the Bible is a fairytale because their feats were so preposterous and impossible.

Many times they would go into battle without the weapons that we would think were necessary, like in the defeat of the city Jericho, where the Lord told them to walk around silently for 7 days…and be armed with…trumpets…

The Lord told them to go fight an entire city with trumpets, and oddly specific, silent walking.

You know what happened? The people listened to what God said would happen, they believed Him, and they did exactly what He said.

Believe it or not, the Lord is still working in the same fashion in His people’s lives today the way He did then.

We are all still experiencing our own personal “Jerichos” or things in our lives that seem impossible to defeat, and yet the Lord is calling us to defeat it.

And He is still calling us to put down our own “weapons” or methods and pick up His preposterous ones by faith, you know, the ones that will actually win the victory like the children of Israel’s trumpets and weird walking directives.

More often than not though, we step into our battles unarmed, half armed, or armed with the wrong thing, and expect great things to happen.

We neglect the very first step of getting with God about our situation and usually, disaster instead of victory ensues.

We cannot enter our fray in a haphazard fashion and then become bewildered when we do not have everything we need to triumph.

We will never win our battles if we neglect the first step of communicating with God or the second step of believing what He told us…or the third step of doing what He said to do.

That didn’t matter though. Had they insisted on their ideas, the story we now have and read of their that is full of faith, would be nonexistent.

Friends, what are you up against today?
What has God placed in front of you and called you to fight against?
What in your life is too big for you by yourself?
What in your life requires a greater level of trust, faith, and obedience to get through?

We have this incredible faith story just like Joshua and the Children of Israel. It’s already written in God’s books about us. But whether or not we get to the conclusion of our story, depends on us, and whether or not we choose to ask God what it says, believe Him when He tells us, and obey what He says to do, is all up to us.

That’s all we ever need for total victory.