Pro Footballer John Bostock Admits He Made His Career An Idol 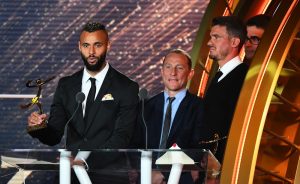 John Bostock, the professional football player who rose to fame as a teen prodigy, is revealing the danger of placing your identity in a career instead of God.

The 26-year-old Toulouse FC midfielder was the youngest person to ever sign with his hometown club Crystal Palace at the age of 15. At 16, he transferred to Tottenham Hotspur which upset a number of Crystal Palace fans and resulted in him receiving harsh criticism and death threats.

He detailed the traumatic experience in a recent conversation with the Christian Hip Hop website Rapzilla.

“I moved to Spurs at the age of 16 and received a lot of abuse to the point where fans were sending me death threats. No one prepares you for that but it was around the same time that I got grounded in faith, so spending time in His presence and allowing my mind to be renewed by the Word was my coping mechanism,” Bostock told Rapzilla. “Somehow He brought me through that period with a smile on my face and without bitterness towards any of my critics but it wasn’t easy at all.”

While his career seemed to be taking off at an age where most kids are still brainstorming about their career goals, things took an unexpected turn. Bostock went from starting on the club to spending most of his time playing on loan for other organizations.

The streets taught me well ⚽️

Eventually he was released from the highly coveted Premier League. The Christian athlete looks back at the career disappointments in his life and realizes that he once placed too much of his identity in football.

“Honestly football was an idol in my life that needed to be dealt with. I pinned my hope and identity on how I performed so God allowed me to go through some serious disappointments,” he said. “As an athlete, you can be celebrated by the fans and media yet still be displeasing in the eye of God. I’ve learned that if God is the priority in my life and I’m trying to honor Him in every area then everything else will fall into place.”

Now Bostock has found a purpose that is bigger than football with his movement called Ballers In God (BIG), which exists to connect other professional footballers through Bible study, prayer and support. While the 2017 Ligue 2 Player of the Year award winner continues to pursue World Cup dreams, he believes God has given him the platform to evangelize to his fellow football players.

“In no way am I saying that I’m the only Christian that God wants to use in the world of football but God has a specific assignment that He wants me to pursue. There are people and teammates that might never be around another believer,” he told Rapzilla. “Pastors and missionaries don’t have the access that I have so I need to take advantage of the platform I’ve been given. So when I started to see the way that BIG impacted the lives of players around me it became clear that this is one of the reasons why I’m still in the game.”