Pastor Sarah Jakes Roberts Admits To Having Thoughts of Suicide 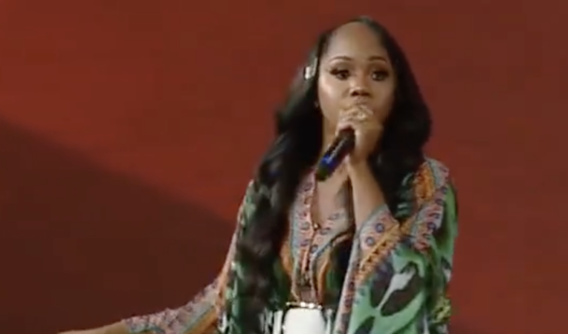 On Pentecost Sunday, Pastor Sarah Jakes Roberts returned to The Potter’s House in Dallas to take care of some unfinished business.

Admitting to past struggles with suicide, Roberts directed her message to the enemy who tried to take her out.

Preaching a message called “Unfinished Business” from the pulpit typically occupied by her father Bishop T.D. Jakes, Roberts recounted the many lessons she learned from him. The most important one being the power of waiting.

As a minister, many people look up to Roberts, but she admitted that her calling was not easy and came at a cost.

“…if you knew what I had gone through when I was waiting to see what God was gon’ show up — God I didn’t know you was gon’ save my child, but I waited to see what You was gonna do, because You are not a man that you shall lie,” she preached.

In the past, the bestselling author has found herself in the middle of controversy.  She had her first child at the age of fourteen and has had a failed marriage.

In spite of her mistakes and what she’s been through, Roberts is humbled by what the Lord has done in her life.

“Yeah, talk about the divorce, yeah talk about the pregnancy, but check your records,” Roberts stated, “because before then, He said He sanctified me, He ordained me, He anointed me.”

As God led Roberts to the Potter’s House to preach, she also shared what God revealed to her was the purpose of the trip.

“I’m sending you back to Dallas on Pentecost Sunday because we’ve got some unfinished business. I want to show the spirit of that little girl that used to be hungry for all the wrong things that you finally met Me for real.”