7 Sermons To Help You Through Holy Week 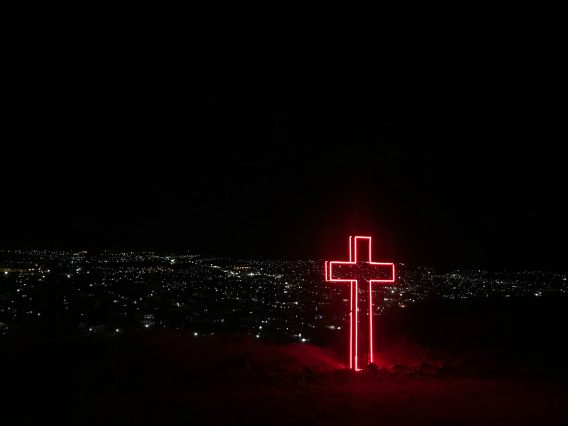 For people who believe in Jesus Christ, the Holy Week leading up to Resurrection Sunday is one of the most sacred times of the year.

Yet, countless people take part in Resurrection Sunday church services without reflecting on the remaining six powerful days of the Holy Week. This year, Ambo TV has gathered a sermon for each day of Holy Week to help you spiritually prepare for Easter Sunday.

Holy Week begins with Palm Sunday which marks the day that Jesus Christ rode into Jerusalem on the back of a donkey. After hearing about the miracles that Jesus performed like raising Lazarus from the dead, a crowd honored his arrival with something that could have been compared to a parade.

They waved palm branches to welcome him.

“So they took branches of palm trees and went out to meet him, crying out, ‘Hosanna! Blessed is he who comes in the name of the Lord, even the King of Israel,” a description of the event found in John 12:13 states.

Pastor Ed Young, the founding and senior pastor of Fellowship Church in Grapevine, Texas, breaks down the event in a unique way with his sermon “The Rocks Will Cry Out.”

In the sermon, he uses a special illustration of children with palm branches that is sure to inspire you with just how much we should be honoring God for all that he has done in our lives.

Jesus had a lot of memorable moments on Monday where the scriptures show us another interesting side of him. On the Monday before his death, Jesus cursed a fig tree that didn’t bear fruit.

He also visited a temple where he flipped a table when it was being used for ungodly things.

“I tell you that to everyone who has, more will be given, but from the one who has not, even what he has will be taken away  saying to them, “It is written, ‘My house shall be a house of prayer,’ but you have made it a den of robbers,”
Luke 19:26‭, ‬46 states.

Pastor Vince Pierre preached a message about this at High Point Church in Madison, Wisconsin where he broke down reasons that Jesus may have physically reacted to the people dishonoring the place of worship.

Check out the sermon above to learn how Jesus’ reaction can relate to the mess in our lives today.

The scripture states, “For to everyone who has will more be given, and he will have an abundance. But from the one who has not, even what he has will be taken away,” Matthew 25:29.

Preacher Joshua Eze, the head of the UNPLUGGED ministry, spoke about this parable in his sermon called, “Parable Of The Talents.”

“We create through our creativity things for ourselves,  therefore when we live through life everything was done in vain,” Eze says in the sermon.

Check out his full message above.

A few key things happened to Jesus on the Wednesday before his death. One of those things was the anointing of his feet by a woman named Mary who broke open her valuable alabaster oil box for him.

She wiped his feet with nothing more than her hair and tears.

“And behold, a woman of the city, who was a sinner, when she learned that he was reclining at table in the Pharisee’s house, brought an alabaster flask of ointment,” Luke 7:37 states.

Pastor Troy Brewer of Troy Brewer ministries dives deep into the story of this woman, offering a unique teaching.

“I’ve done a lot of studying of what an alabaster box is. An alabaster box was typically something that identified a prostitute,” Brewer revealed, digging deep into the study. “..She broke the alabaster box. Why? She’s showing him you gave me a new identity.”

A number of churches honor the last Thursday of Jesus’ earthly life with something called Maundy Thursday. On this day, Jesus washed the feet of his disciples and broke bread and wine to represent his body and blood during the Last Supper.

On this day, he also prayed an agonizing prayer at the Garden of Gethsemane ahead of his arrest.

“Father, if you are willing, remove this cup from me. Nevertheless, not my will, but yours, be done,” Luke 22:42 states.

Pastor Piper of Desiring God ministries spoke about this prayer in his sermon titled, “Lord, Teach Us To Fight: The Double Battle in Gethsemane.”

“The father wants me to remind you there is no other way. So your prayer not to drink it will not be answered, but I am here to strengthen you,” he said. “ Jesus is going to say in a minute my flesh is weak, but my spirit is willing.”

Check out the full sermon above.

The last Friday of Jesus’ life was painful for the son of God, his friends, and family. He was hung on a cross, bullied and beaten.

It was through that death that our sins are able to be forgiven.

“And they spit on him and took the reed and struck him on the head,” Matthew 27:30 says.

In his message “The Job Has Been Completed,” Pastor Rick Warren reveals why people should feel good about the things that Jesus endured on the cross.

“Aren’t you glad that he said I’ll take the rap, I’ll do the penalty,” Warren questioned.

Listen to the full message above.

On the day before he rose again from the dead to fulfill scripture, Jesus was buried.

“And Joseph took the body and wrapped it in a clean linen shroud and laid it in his own new tomb, which he had cut in the rock. And he rolled a great stone to the entrance of the tomb and went away,” Matthew 27:59‭-‬60 ESV reads.

Pastor John MacArthur, the leader of the Grace to You Christian radio program, has a sermon that details why the burial of Christ deserves our attention.

“The burial of Christ is as supernatural and as divinely wrought as anything else in the incarnation,” he said. “The burial of Jesus is so important that all four gospel writers talk about it.”