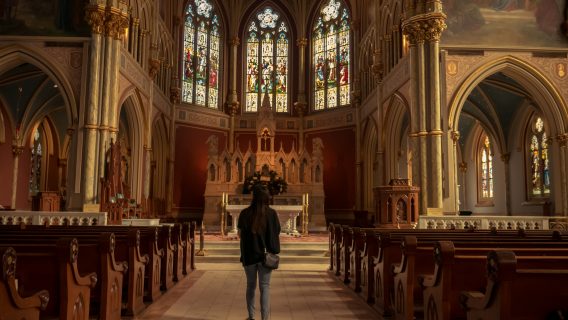 First Baptist Church of Oklahoma City has elected Rev. Sarah Stewart as Senior Pastor.  She will be the first women to serve in this capacity for the 128-year congregation that was once the home of the Herschel Hobbs, the well-known Southern Baptist leader who served as Senior Pastor from 1949-1973.

The 36-year-old Stewart, who was unanimously nominated by the pastoral search committee, felt the call to ministry at the age of 22, although she admits that she wrestled with it.  Despite her reservations, she committed to engaging in ministry work, serving as a leader at First Baptist Church in Norma, Okla. before graduating from George W. Truett Theological Seminary in 2008.

Since graduating, Stewart has been the young adult minister at First Baptist Church of Oklahoma City.  Her responsibilities included leading weekly adult Bible study, mentoring young men and women with a calling for ministry, and working with the senior pastor on sermon preparation.

For Stewart, these experiences over the past decade have been leading her to pastoring.

“I believe that I have been pastoring all these years in my current role. Having said that, God is clearly doing something in my life right now that is making it clear that my time to pastor is approaching..” Stewart wrote in her letter to the search committee. “I have the most wonderful mentors and have reached out to each of them for counsel. The word from each of them was the same and after each conversation I found myself more and more open to what God is doing.”

Although the committee chose Stewart from 54 candidates because they believed her “to be the right person for the task ahead,” there was a time when despite her qualifications she would not have been considered.

Once a member of the Southern Baptist Convention, First Baptist Church left in 2001 after revisions to the Baptist Faith and Message included such declarations as the pastorate is “limited to men.” First Baptist quickly became a leading congregation in the Cooperative Baptist Fellowship, an organization of like-minded churches.

Stewart officially assumes the role of Senior Pastor on Nov. 19. Her husband, Brad Stewart also serves at the church as a minister for discipleship and youth.