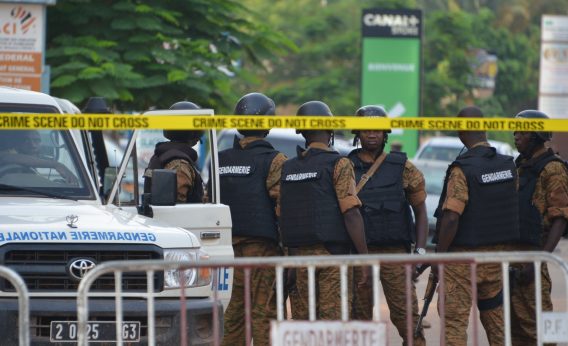 Yesterday gunmen attacked a Catholic church in the village of Dablo in Burkina Faso, killing six people, a priest and five worshippers.

According to reports, the attack on the church occurred in the morning when a group of 20-30 gunmen arrived at the church on motorcycles.  They entered the church and started shooting as worshippers tried to flee, killing Father Simeon Yampa and five others.

After the gunmen shot the parishioners, they then set the church on fire. Their reign of terror extended outside of the church as they set fire to other buildings, including a health center and all places serving alcohol.

The mayor of the village, Ousmane Zongo, said the act of terror has left the city in a panic.

“People are holed up at home. Shops and stores are closed,” he told AFP. “It’s practically a ghost town.”

While no one has taken credit for Sunday’s attack, it is strikingly similar to other violent incidents instigated by Islamist extremists who are destabilizing the once peaceful African country.  Last month, gunmen on motorcycles gunned down Chrisitan worshippers as they left church.  The pastor, two of his sons and three other worshippers were killed in that attack.

This is the third known attack on a Christian church since 2015 when the country saw an increase in violence.  However, the jihadists have regularly targeted Muslim and Christian clerics in the north.

In February jihadists murdered Catholic priest Father Cesar Fernandez.  He was 72 and had been in African since 1982.  Another priest, Father Joel Yougbare, remains unaccounted for after being kidnapped at gunpoint in March, although there are unconfirmed reports that his body has been discovered.