The sun danced around the palm trees as fans lined up outside of the James L. Knight Center in Miami, FL for the 21st Annual Gospel Celebration live taping! From the young to the seasoned saints (or aint’s), everyone had on their best attire in hopes of the camera panning across their faces in the auditorium.

Before the event, gospel singers, national tv personalities, and upcoming artists mingled on the red carpet. Former NFL players were present too, joking and reminiscing about their youthful days of playing in the league and making it to the Super Bowl. Miami was charged with high energy and friendly faces. 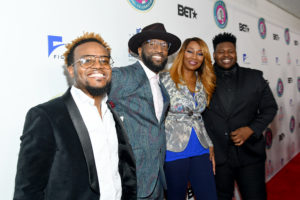 Remarkably, this celebration, which remains the only and longest NFL sanctioned gospel event, at one point seemed unlikely. Founder Melanie Few, who was also present on the red carpet, reflected on the difficult journey that led to one of the staple events of the super bowl.

“I had been coming to the super bowl as a young girl…and I couldn’t understand why there wasn’t a gospel event surrounding too,” Few told Ambo TV on the red carpet.  “And I said I wish there was a gospel. So I wrote the NFL for seven years…From 1991 to 1998…I had seven years of rejection letters and then it came to pass in 1999.”

Even with the approval of the NFL, Few admits that successfully executing the program was a struggle due to the lack of support.

“I think about when I started in 99 I had no support but God and my parents…I couldn’t afford staff,” stated Few. “And I think about the nights I got no sleep trying to pull it together and I could hear my mother saying ‘If God brought you to it, He’ll bring you through it.”

The corporate executive got emotional reflecting on the legacy of her mother’s support. “I know she’s in heaven saying, ‘Whatever God gave her, she didn’t let go,’” Few said through tears.

Now, as the event celebrates its twenty-first anniversary, Few’s vision has grown to include some of the greatest names in gospel and secular music.  On the red carpet this year were major media outlets lined up to chat with stars like Yolonda Adams, Travis Green, LeAndria Johnson, upcoming male group artists, and the show’s host Rickey Smiley.

The show broadcasts tonight at 8 pm EST on BET.  To watch Ambo TV’s interview with Few and others like Yolanda Adams and Rickey Smiley on the red carpet click on the link above.