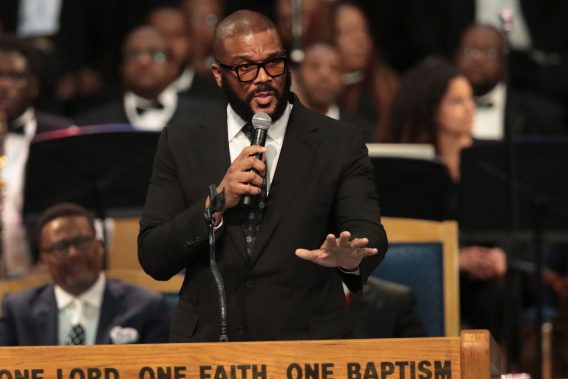 Tyler Perry is inspiring one preacher and gospel singer who believes the film mogul is answering the call of God with his recent generosity.

Perry offered a job to veteran actor Geoffrey Owens who starred in The Cosby Show as Elvin Tibideaux from 1985 to 1992. Owens has not been able to make a living off of an acting career in recent years.

When the news went viral about Owens working as a cashier at the Trader Joe’s grocery store in New Jersey, film mogul Perry offered him a job. Deitrick Haddon, the gospel singer turned pastor of Hill City Church in Los Angeles, Calif. said that Perry’s offer was a reflection of him listening to God. The preacher recently took to Instagram to applaud Perry’s efforts.

“This is why I rock with @tylerperry! He knows how to respond to God when he speaks,” he wrote. “I believe this is why he’s blessed with what he has. God will bless you with the resources if he can trust you to bless someone else when God commands it! #KeepobeyingGodTyler #KingdomPeople #PassontheBlessings.”

Perry initially reached out to Owens in a tweet, inviting the actor to join the OWN series The Haves and the Have Nots.

“#GeoffreyOwens I’m about to start shootings (sic) OWN’s number one drama next week! Come join us,” Perry tweeted last week. “I have so much respect for people who hustle between gigs. The measure of a true artist.”

Owens expressed his willingness to accept the offer in a recent Entertainment Tonight report.

“That was kind of cool,” Owens said. “I mean, that kind of sounded like he was saying, ‘Come work with me.’ I’m so, like, skeptical. Like, really? Are you actually saying come work with me? Because we’ve never worked together before. So, that’s a very, very generous thing for him to say. And we’ll see what happens with that. But, that’s encouraging.”