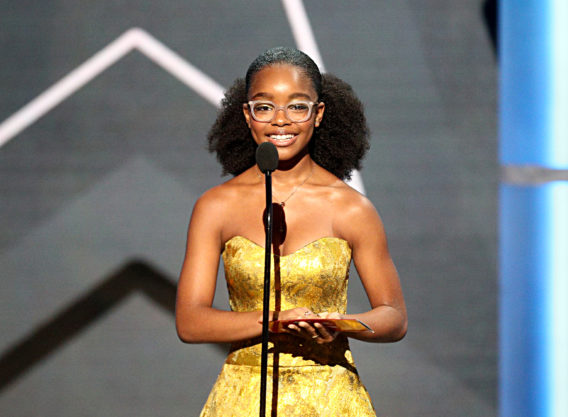 You may know Marsai from her role as “Diane” on the hit Television series “Black’ish.” She plays the sweet, sarcastic, and exceptionally intelligent twin of brother “Jack” portrayed by Miles Brown. They play opposite Anthony Anderson (Dre), and Tracee Ellis Ross (Rainbow).

If you have ever watched the show, you will find out within the first ten minutes that Marsai is the breakout star of the series and is obviously going places in life. Her presence on camera and complete commitment to her craft is scary good.

Marsai is just as smart as the character she plays on TV, using her hard earned money to executive produce her own film “Little!” With a budget of $20 million, the film raked in a total $48 million at the box office.

That’s a great return on investment for a 14-year-old. And there I was at 14 thinking my comic book collection would net me a decent profit.

My failures in investment aside, Marsai is proving to be a powerhouse of her industry and setting the bar pretty high for her generation.

After accepting her “Young Stars” award at the BET Awards, Marsai took to Instagram to thank God and family.

Appreciation post to God: I sometimes see these types of posts as corny but this is how I feel lol. This year has been a roller coaster. This year has been filled with crazy emotions and big blessings that I couldn’t even imagine me having. Moments from this year, I was in a dark place. A place that I didn’t think I was going to get out of. I thought I wasn’t good enough and I thought I needed to present myself in a way that was “perfect” when I didn’t need to. Putting so much pressure on myself. Fighting with myself. This feeling had nothing to do with how child actors think. These were my own personal thoughts. The more I kept how I was feeling hidden, the more this dark emotion got bigger. I finally talked to my parents even tho they already knew how I was feeling. It made me feel better about myself. A sense of relief. I started praying more, talking more, and spending more time with the people I love. Now I’m feeling the best I’ve ever felt In a long time. Thank you God for hearing my prayers. Thank you God for blessing me with the greatest family and friends. I encourage everyone to speak their mind to anyone u trust. Even asking a random person “how are you?” Can mean something. Also, be yourself because no one can be like you, other than YOU. Okay I’m done bye♥️ – MM

At only 14 years of age Marsai is not only an actress, producer, and influencer, she is now a source of inspiration for us all.