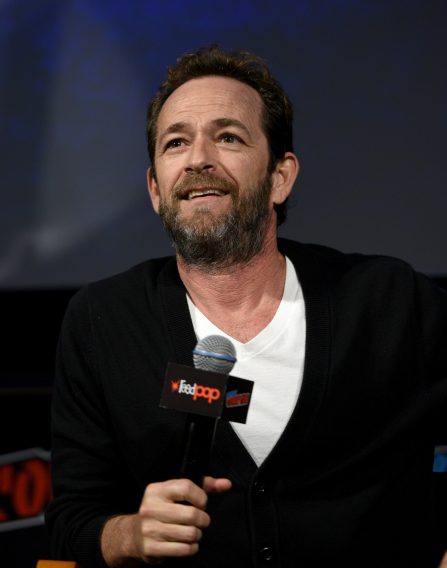 Luke Perry, who rose to fame as the star of Beverly Hills 90210, died Monday morning at St. Joseph’s Hospital in Burbank, California after suffering a massive stroke last week.

In a statement released by his rep, Perry’s family expressed their appreciations for the prayers and support from people around the world.

“The family appreciates the outpouring of support and prayers that have been extended to Luke from around the world,” the statement reads, “and respectfully request privacy in this time of great mourning. No further details will be released at this time.”

Perry, who reportedly was sedated by doctors after his stroke, was not alone when he passed earlier today. His family and loved ones were around him.  According to his rep, “[He] was surrounded by his children Jack and Sophie, fiancé Wendy Madison Bauer, ex-wife Minnie Sharp, mother Ann Bennett, step-father Steve Bennett, brother Tom Perry, sister Amy Coder, and other close family and friends.”

When news of Perry’s stroke broke last week, many fans and other celebrities sent up prayers and words of support.  This included his Riverdale costar Hayley Law, actor Dean Caine, and Perry’s longtime friend Kristy Swanson who played Buffy in the film Buffy the Vampire Slayer.

Perry was currently starring in Riverdale as Fred Andrews.  He previously starred in the made for television film Welcome Home for UP, a faith-based network.

Most fans know Perry, for his role as Dylan McKay, however. Last week, on the same day that news of Perry’s stroke broke, Fox announced that it was planning a 90210 reboot to debut in the summer. Perry had not agree to join the relaunch, but other original cast members like Jennie Garth, Ian Ziering, Jason Priestly, Brian Austin Green, Tori Spelling and Gabrielle Carteris have already signed on.