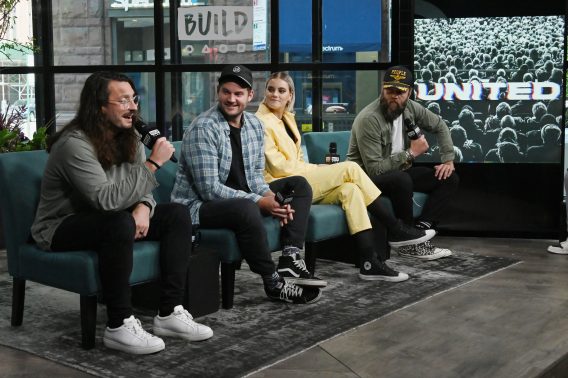 Earlier this week, Hillsong UNITED received the prestigious Pandora’s Billionaires Club Award to celebrate over 1.8 billion lifetime streams on the platform; a feat reached by only a handful of artists in their genre.

The award was given during their VIP (Diamond) Fan Experience prior to their sold-out performance at Madison Square Garden.  During the event, JD expressed his gratitude for the award.

“To say we are completely humbled and grateful to receive this accolade and be able to travel these songs would be an understatement! We are so thankful to everyone who has come out to the events and engaged in these songs.”

UNITED is known for its chart-topping albums like “Zion” and “Empires,” both peaking at number 1. With the release of its newest project “People,” the group saw its largest career street week, generating over 8 million streams and over 100K albums sold within the first week.

The band originally started as a youth group at Hillsong Church in Australia before eventually expanding. Now they are considered to be the most influential group within contemporary Christian music and the voice of worship for the 21st Century.

The Australian-based group is, “committed to creating a musical expression that is almost uncomfortable in its uniqueness.” They state that their mission is “to write songs that awaken churches and individuals to the fact that we are redeemed and called into the story of God.”

“We have always endeavored for these songs to help people in whatever season of life they are in,” revealed JD. “And [to] bring glory to God who gave us all life in the first place!”

Melissa Chalos, the Christian and Gospel Music Curator/Programmer at Pandora commended the group for their uniqueness and reaching the Billionaires Club.

“Innovation, authenticity and ‘Oceans’ got them there. Church people will be singing their songs for generations to come.”