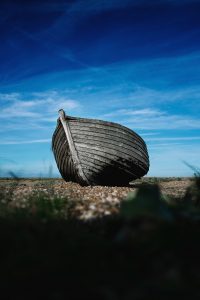 Today we’ll be looking at Noah; another man of great faith.

“It was by faith that Noah built a large boat to save his family from the flood. He obeyed God, who warned him about things that had never happened before. By his faith Noah condemned the rest of the world, and he received the righteousness that comes by faith.” Hebrews 11:7

The story of Noah is shown in Genesis 6 and 7. The story starts off by describing the kind of man Noah was.

This is the account of Noah and his family. Noah was a righteous man, the only blameless person living on earth at the time, and he walked in close fellowship with God. Genesis 6:9

He was a righteous man. The only blameless person living on earth at that time. It also says, he walked in close fellowship with God; similar to Enoch.

Noah’s world was sinful. The iniquity was so much that God regretted ever creating man in verse 6. Noah was exposed to sin. He was exposed to temptation – every type you could think of. And yet he stayed blameless.

Noah walked closely with God enough that he could hear Him speak to him. God told him to build an ark because he was going to destroy the world with water. By faith, he believed what God was telling him despite him not seeing or hearing about something like it before. Not only did he believe, he acted on the word he heard. Faith without works is dead James 2:26.

Noah wasn’t ask to build something that was going to take him 1 week to build. From the little research I did, it is believed that it took him at lest 50 years to build this ark. You’ve got to be a man of faith to continue doing something like this for over 50 years in the face of constant mockery.

Everyone who saw it would have asked “Noah, what is this thing you are building?” His response, “It’s an ark God told me to build because He is going to destroy the earth with water. You need to repent from your sins.” They would have laughed at him. Can you imagine what this task must have felt like for him? Can you imagine the name calling? What his family would have said? How about his friends? They would have been thinking he was crazy. Do you really think he didn’t have any moment when he felt like what he was doing didn’t make sense? I am sure there were days he woke up and didn’t want to pick up his building tools because he was exhausted. Despite these feelings, he continued building. He didn’t go according to how he felt. Noah’s obedience made me start thinking. Do I doubt what God tells me? Do I try to talk myself out of every assignment God gives me because it doesn’t make sense? Do I try to justify the reason why I am disobedient to God? Do I consider what people will say instead of what God will say?

Many times God will tell us to do things that may be considered foolish to our natural minds. Friends, families and even fellow christians will try to talk us out of it. Remember the story of Peter? How he was trying to talk Jesus out of his assignment in Matthew 16:22? Sometimes it isn’t because these people are bad. It is because they can’t see or hear what we are seeing or hearing. This is where discernment comes into play.

Have I given up on my God given assignment because I am tired? This challenged me to work on this post today even if I feel like going to bed to sleep because my body is tired. I was thinking of putting up an apology for today and then promise to post this tomorrow. However, I know I can’t quit and postpone everything just because I am tired. It isn’t a sacrifice if done out of comfort. Thank God for the grace to push through my feelings.

Noah’s knowledge about what was to come made him prepare well. I would like to think Noah’s world was similar to ours. Our world is full of sin. We’ve been hearing and talking about the second coming of Jesus Christ for a while. People think we are crazy. It’s easy to doubt this when logical reasoning is applied. However we don’t understand spiritual truths with logical reasoning. These things beat our human imagination. As a christian, do you really, genuinely believe that Jesus Christ is coming soon? Have you started applying logical reasoning to the truth of God’s word. Have you found yourself thinking that the bible is somehow exaggerated?

In Noah’s days, everyone else lived as normal and they moved on with life the way they wanted to. Noah didn’t live a “normal” life like the others. He lived a focused life. He had a task to complete and that was what he focused on.

Am I still focused?

If Noah could be blameless in a world where sin was a norm, I have no excuse.

I love the last line in Hebrews 11:7 where it says “he received the righteousness that comes by faith.” If he was able to live like this then, I should be able to do more since I have the Holy Spirit. To whom much is given, much is expected Luke 12:48.

So what are my decisions?

Thanks for reading and I hope this has ministered to you in some little way. If so, please let me know what your decisions are in the comment session below.

See you tomorrow as we look at Abraham and Sarah; a hero and a heroine of faith.

-Efua is a mentor and blogger.  You can read more from her on her blog Grace Over Pain.