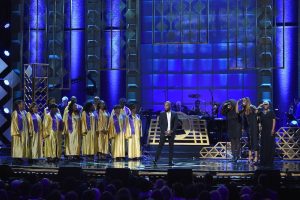 Gospel music artists are adding their own twist to the hit dance challenge of the summer, the “Shiggy.”

The viral dance was created by New York City Instagram comedian Shiggy, the founder of The Shiggy Show. More than just a comedian, Shiggy has become somewhat of an internet choreographer after creating a five-step routine to rapper Drake’s hit song “In My Feelings.”

Countless people have been taking part in the viral challenge by making social media videos with their own special moves added to the routine. Among those people are some of the biggest names in gospel music who decided to join in on the fun.

Kirk Franklin, the gospel music artist, composer and record label executive, decided to include his wife Tammy in the couple’s version of the dance challenge. Known for writing and producing Billboard chart-topping hits, Franklin added some church claps and organs to the song and dance.

Shiggy took notice and posted the Franklin version on his own Instagram page.

“In the name of Jesus.. My man Kirk Franklin and his lady Tammy Franklin did [their] thing,” he wrote.

Kierra Sheard, the powerhouse gospel music singer, commented on the video saying how much she loved it. Before the Franklins posted their video, she shared her own high energy version with the world.

I put it in my IG story and my family and friends said post It. I was having fun and took pieces from my Zumba class by @turnupwithtanci. This little space wouldn’t let me be all the way great! 😩🤣- I was dancing this kind of hard because I just gotten out of my work out lmbo #inmyfeelingschallenge #bigGirlCanDanceToo #love #fun I Am #KiKi 🤣🤣

The singer whose nickname is Kiki chose to add some moves from her Zumba dance class to the Shiggy dance craze. Christian music quintet Shelby 5 took things a step further and sang their own lyrics on Drake’s beat while performing a routine for the challenge.

“G-O-D I know you love me/ I know you’re riding, I know you’ll never ever leave from beside me,” the group harmonized while incorporating the Shiggy dance in their Instagram video. “Because I want you and I need you, I’ll be down for you always..”

filed under
do the shiggy, drake, gospel music, in my feelings, shiggy, the shiggy challenge