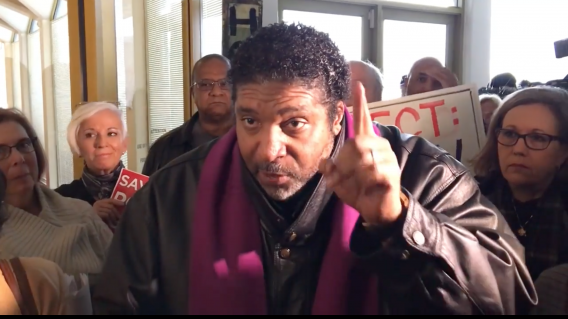 Rev. William J Barber II learned that he was a  “Genius Grant” winner while being  placed under arrest for protesting minimum wage.

Barber, the pastor of Greenleaf Christian Church in Goldsboro, N.C., is known for his longtime political activism. He was in Chicago protesting minimum wage at the McDonald’s headquarters when he learned about being named a 2018 MacArthur Fellow during his arrest.

It seems learning about the award was a welcome piece of good news.

“It’s a gesture of support, to do more of what you’re trying to do,” Barber told The News & Observer. “It doesn’t say rest on your laurels, but to keep on pushing. In this work, sometimes you get heavy criticism. People do say ugly things, ‘You just want money.’ I just want other people to have healthcare. You know, Jesus healed everybody and never charged a co-pay.”

The Genius Grant has become the unofficial name for the MacArthur Fellows Program which awards “no-strings-attached fellowships” to people that are often nominated anonymously. This year, 25 people received the honor and $625,000 grant, which will be distributed over a period of five years.

Barber’s work as an activist was honored by the foundation this year. The preacher leads his state’s NAACP, and was a driving force behind a movement called “Moral Monday,” which has consistently protested outside of the N.C. General Assembly.

“Merging moral and activist traditions, Barber is providing a faith-based framework for action that strengthens civic engagement and inspires the country to imagine a more humane society,” says the MacArthur Fellows Program website’s description of Barber.

Barber credits his father for teaching him how to make a difference.

“My father early on taught me that the only purpose of life is to make a difference in the lives of others and to stand up for what is right and just and full of love and full of compassion,” he said.